GAINESVILLE, Ga. — CWT Farms International celebrated its 60th anniversary with a dinner for its customers and former company leaders.

The dinner brought together CWT’s leadership from throughout its history, including Madge Burch, the widow of former owner and president Ray Burch, Joe White, Clyde Honeycutt and Mike Steffen, along with customers from South America, the Caribbean and North America. 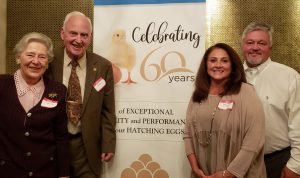 The dinner brought together many people who led CWT Farms over the years. Pictured are Betty White and her husband, former CWT CFO-Senior Vice President Joe White and current CWT President Rickey Smith and his wife, Patti.

“Having many of the people who are the reason we have been in business for 60 years and many of our long-time customers come together to celebrate this milestone was really special,” said CWT Farms International President Rickey Smith, who has been with the company for more than 24 years. “We had customers travel a long way to celebrate with us and we appreciated that.”

With several customers from family-owned businesses were two or three generations who have worked with CWT Farms.

“We had a customer whose grandfather worked with Joe, Clyde and Mike, so we’ve supplied them with eggs for more than 40 years,” CWT Vice President of Sales Patty Chickering said. “The bonds that developed decades ago with our customers are still strong.”

A vaccine laboratory and manufacturing unit, Select Labs, was established in Gainesville, Ga. in the late 1970s. It originally focused on Marek’s disease control vaccines. This company was subsequently sold to the Rhone-Polenc Group. It is currently owned by Boehringer Ingelheim.

CWT was purchased by the Arbor Acres broiler breeder division of Booker, London, England in 1989. The Arbor Acres Division was sold to BC Partners, a private investment company, and combined with Ross Breeders Ltd. into the Aviagen Group, the largest producer of broiler breeders in the world in 1999. The Aviagen Group changed ownership in 2003 when Advent International purchased it from BC Partners. Advent sold the group to Erich Wesjohann GMBH & Co. KG (the Erich Wesjohann Group), a leader in the poultry egg science industry.

CWT has access to all major breeding companies, which allows it to source the right breed for each customer’s needs. Through years of experience and research, CWT has developed handling and shipping controls to ensure safe transport of its eggs. CWT is accredited by the National Poultry Improvement Plan, which works to meet the most stringent biosecurity requirements.

Since 1959, CWT Farms International has been dedicated to the production of high standard broiler hatching eggs for customers all over the world. The majority of CWT’s business is in North America, Central America, Mexico, the Caribbean, South America and Africa. Other markets served are Western and Eastern Europe and the Middle East. CWT produces hatching eggs of the breeds specified by its customers. For more information, contact CWT at 770-532-3181 or visit www.cwtfarmsinternational.com.